Invitation to the "Landology" exhibition of Italian artist Irina Novarese 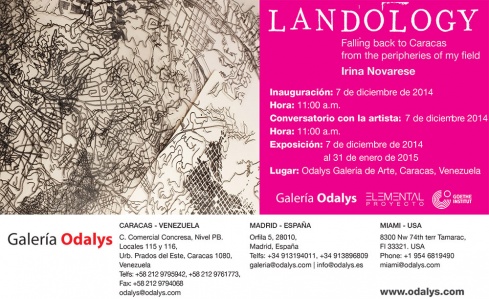 Vernissage and panel discussion on december 07 at 11:00am. With the participation of the artist Irina Novarese, curator Maria Luz Cárdenas, architect and urban planner Dietrich Kunckel, architect and urban planner Henry Vicente, Mariela Rosso and Nikolai Petersen from the Goethe Institut in Caracas and from the ELEMENTAL Proyecto gallery owner Odalys Sánchez and artist Zoltan Kunckel.

ELEMENTAL Project was born as an initiative of Odalys Foundation in order to generate an insertion mechanism of emerging artists in the art world through the participation in biennales, art fairs and collective and individual exhibitions allowing the development of a self-sustaining artists residency program.